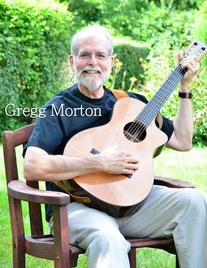 Gregg has been enjoying music since at least the 4th grade, when he started taking clarinet lessons and singing in the children’s choir at church. He played clarinet in school bands and orchestra, and had a year of playing bass drum in junior high - because he could keep the beat! In high school, he learned some basics of the upright bass, to accompany the chorus. His first pay for performing came from singing in a Men and Boys choir at church. In college, he taught himself to play guitar to accompany himself on folk and pop songs.
One of Gregg’s favorite pastimes from childhood on has been listening to live or recorded music and singing along – usually harmonizing.
In the early 90’s, Gregg’s son was taking voice lessons and his wife paid for a few lessons for Gregg to help him to avoid wearing out his voice while he sang. He’s still taking lessons! He’s happy using what he’s learned for a variety of musical styles. He enjoys singing alone as well as with ensembles (either lead or harmony).
Gregg has been a member of the Plank Road Folk Music Society for several years, which has brought him into contact with all of the other members of Lonesome Eagle, as well as many other good musicians. 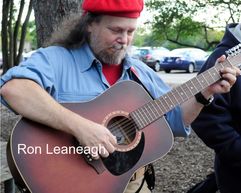 According to family members, Ron was singing almost before he started to talk. Grandfather had been a band leader in the Navy, Grandmother was an accomplished violinist, Mother played piano, and sang. Father, on the other hand was tone deaf. School and church choirs were the place to find Ron growing up. During fifth grade, for his birthday, he received a Baritone Ukelele. This may have been a mistake, for it sent him down the road to perdition, or Folk Music, as some people call it. While his main instruments now are voice and guitar, Ron also plays some autoharp, banjo, bass, the aforementioned ukelele, as well as some percussion. He gave up on the violin at a very early age.
Ron got involved in Theatre, and Musical Theatre, at school. Acting, singing, and working backstage as a technician became his passion. He performed in High School, College and Community theatre, playing roles including Pippin, Nicely-Nicely Johnson, Hysterium, Samuel (Pirate's Lieutenant), and even being typecast to play Jesus in Godspell. Eventually he specialized in technical theatre and gave up on acting in plays. He still acts up though.
Ron is also the sound man for Lonesome Eagle, as well as for other bands and venues that he works with, including the groups Blind Squirrel, Kilty Pleasure, and Thirsty Night Pluckers, and venues including Maple Street Chapel, Plank Road Folk Music Society, and Two Way Street Coffee House. His sense of humor has been described as, “droll”, “dry”, “quirky”, “unfortunate” and “non-existent”. 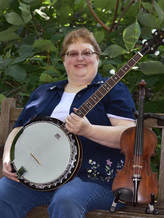 Cathy has been a member of the folk scene in the western suburbs of Chicago for most of her life. Starting with violin lessons at age 10, she quickly moved on to fiddle, mandolin, guitar and banjo in her early teens. Cathy taught alongside her parents at the Jones Family Music School where she taught both private and group lessons in fiddle, mandolin, banjo, guitar, hammered dulcimer, harmony singing and string band classes for almost 35 years. A longtime member of Plank Road Folk Music Society, she served on the board in various capacities for over 20 years.
While pursuing a degree in music at Earlham College in Indiana, she developed her love of dance music while a member of the Earlham College Barn Dance Band and as the fiddler for the Earlham Morris Dancers. She has been an active member of several bands over the years, including the bluegrass bands Wildwood Pickers and Midnight Jubilee; the country/bluegrass group Small Town News; the folk chorus the East Hickory Minstrels and with her parents in the Jones Family Band. Cathy is one of the founding members of the Plank Road All-Volunteer String Band. 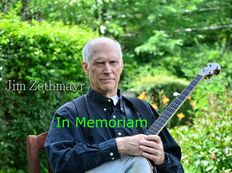 Jim started singing in church choirs at age 8, a very long time ago and went on to sing in high school, college and Navy choirs, participating in madrigals, “small choir” and musicals along the way with supporting roles in On a Clear Day and the sextet in Trial By Jury (twice).  Having taught himself some chords on a very old guitar that was lying around, he formed his first folk group in high school, singing at school dance floor shows and a short run at It’s Here Coffee House in Evanston, IL.  Years later he fell in love with the sound of the 5 string banjo and devoted many hours trying to learn that instrument.  Currently he leads a monthly bluegrass “jam” co-sponsored by the Plank Road Folk Music Society and the Two Way Street Coffee House and plays with the Plank Road String Band at barn dances and other events.  He has performed many times both solo and in small “folk” groups at the Two Way Street Coffee House in Downers Grove, IL and other venues in the Chicago area. We are very saddened to report the death of our founder, Jim Zethmayr, on April 30, 2017. 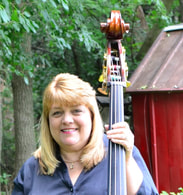 Carol Spanuello
Music has been an important part of Carol’s life starting with her parents who always listened to music of the 30’s 40’s and early 50’s.  This very much influenced her to where she joined her church’s choir as well as playing hand bells.  In school, she played the flute and was a member of the band and orchestra and also sang in the choir.
A new chapter began for her as she discovered the Plank Road Folk Music Society where, at present, she thoroughly enjoys the Sing Arounds and Bluegrass Jams.  Along with playing the flute, Carol also plays the guitar, mandolin, harmonicas and her real love, the upright bass.
Currently, Carol is enjoying her retirement from GE Capital Real Estate and teaches flute and also enjoys playing upright bass and sings lead and harmony with other local bands. 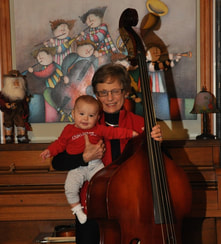 Carol Sommer
Carol begged her mom for piano lessons when she was 8 and has been playing music ever since.  In college she picked up a ukulele and subsequently graduated to an old beat-up $25 Gibson f-hole guitar (fortunately, she later got a job and discovered Martins).  Mandolin followed, and then, at long last, she fell in love with the upright bass; she likes it 'cause it's BIG.  Along with Lonesome Eagle, Carol plays bass with the Plank Road String Band and Thirsty Night Pluckers.

Carol also loved to sing and did so in church and school choirs all through high school and college.  Later she joined the Apollo Chorus in Chicago, performing The Messiah and other concerts in Orchestra Hall with the Chicago Symphony Orchestra.  Carol also performed in productions of Gilbert and Sullivan’s Iolanthe and Pirates of Penzance at the University of Chicago. When Sherrill Milnes came home to conduct a concert with the Downers Grove Oratorio Society, Carol decided she couldn't miss the opportunity to perform on stage with the maestro and joined that chorus as well.
In 2000 she found a home with the Two Way Street Coffee House in Downers Grove, and has been regular at jams and events there as well as with the Plank Road Folk Music Society.